The schizophrenic nature of the Lieberman campaign, summed up in a single picture. How do you reconcile the statesman-like Lieberman on the left with the man who issued the less-than-truthful ad on the right? 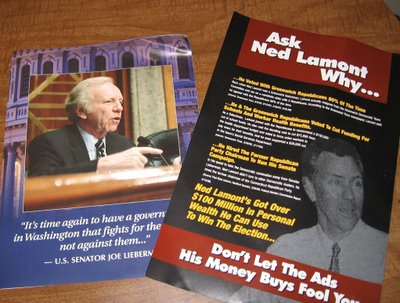 It's as if his campaign isn't sure which is more effective: Statesman Joe is a Great Senator or Ned Lamont is an Evil, Blog-Loving Communist Republican. So why not try both? Who's going to notice?
Posted by Genghis Conn at 6/28/2006 04:08:00 PM

GC...lets not divert Joe from a losing path here....recalibrate a new topic...

BAGHDAD, Iraq (AP) -- Eleven Sunni insurgent groups have offered an immediate halt to all attacks - including those on American troops - if the United States agrees to withdraw foreign forces from Iraq in two years, insurgent and government officials told The Associated Press on Wednesday.full story here

WASHINGTON (AP) --The Supreme Court on Wednesday upheld most of the pro-Republican Texas congressional map engineered by former House Majority Leader Tom DeLay and freed all states to draw new political boundaries as often as they want.full story here

It was all fine and good when Joe launched really stupid attacks against Lowell Weicker in 1988. Joe has been forgiven for this, but when he arrived in Washington, he was known as the guy who used ads about voting attendance and honoraria to win. So basically, everyone had to vote on everything, even on procedural matters after that. Big deal.

Now that Joe has turned his attack on a lefty, it's OK. It was OK for Joe to needle Dick Cheney in the 2000 VP Debate about the millions he earned from Halliburton, but it's unseemly for him to refer to the wealth of Nedley from Greenwich.

Not to mention, what's the deal with Ned and the American Legion thing in the Courant today?

Zengerite--
What's your deal? One, are you a Democrat, and if so, what do you like about Joe Lieberman?

I read your impassioned posts at New Haven Independent, and for the life of me, I can't figure out where you are coming from...

I'm a fading blue, no longer a true blue. I think Lieberman was first elected in a freakish accident and the products of such accidents are often freakish themselves. (Let's not forget BuckPack and all that. Sometimes, you should judge a man by the company that keeps him.)

For the life of me, I didn't understand the post-1988 universal attraction of Lieberman at all. I was baffled when Gore selected him as a running mate- yeah, I understood it tactically, but I thought he brought nothing to the table. I find it incredible that people are shocked that Joe can fight like a dog- 2000 just bleached out 1988 from memory.

In the present situation, there is a danger for the Blues- even for fading blues. If you agree with Lamont on the war- and I will admit, I'm closer to Joe than Ned on the issue, Lamont is just going to hurt the cause. He'll lose to Joe in August...or November. And it will be a big victory for Bush, because the Neddites out there are putting all the chips on the table.

If Joe loses the primary- which is quite possible, anything is possible in a primary in the dog days of August- his independent bid will be successful. If 25% goes to Schlesinger, all Joe needs to do is keep about 60%-65% of his votes from last time and he's in office as an indy.

Then...who holds the cards? Joe holds the cards- he becomes a kingmaking vote in what could be a 49-48-3 Senate. You just made Joe stronger, when he could have slipped quietly away into the halls of irrelevance, while still getting an occasional handout for Connecticut from the Rep leadership / White House.

To tell you where I'm coming from- I'd like Joe to fade away. That's essentially what he's doing; until Ned came along, he was losing relevancy. (The 2004 campaign ratified that.) And I think this is probably his last go 'round.

RFK, of blessed memory, once told us, "I dream things that never were and say why not?" (I don't think he said that while he was counsel to Joe McCarthy's committee, I think he said this later.) The Neddites have got to blend it their RFK idealism with some RFK realpolitique. RFK didn't really go after LBJ until he knew he could bring him down.

If anyone can clone Abe Ribicoff and bring him back, I'd vote for the guy. Except for one horrible misstep as governor (abolishing county government), he was a pretty good guy. Unfortunately, I don't think I'd have much success going door-to-door with a petition to put "the clone of Abe Ribicoff" on the November ballot. Except for some of his real strongholds in Hartford.

If the cloning technology develops, I would also bring back Gov. Schuyler T. Merritt and run him against a resurrected Gov. Wilbur Cross, just for kicks and giggles.

60's nostalgia---that's basically what the left has these days. From Howard Dean to Zengerite--"let's bring back the glorious heyday of the 1960's!!!!"

If only the kids today would protest, or something--where is the outrage??!!!

Ha--sorry--I mock because I care.

I've returned from vacation! Looking over the main page, looks like Lamont is continuing to gain momentum. I've also enjoyed the posts on Malloy so far.

I saw that the constitutional amendment to ban flag burning failed by one vote. Where did Lieberman vote on this issue? I have a hunch it might have been the GOP opinion. Does anyone have more info on how the vote went down?

And in case anyone is wondering, I think it's ridiculous that flag burning is even being debated right now! Didn't the supreme court already decide this in 1989?

Yes, the Supremes did decide it and that's why a constitutional ammendmeent is now in play....an ammendment that we do not need BTW